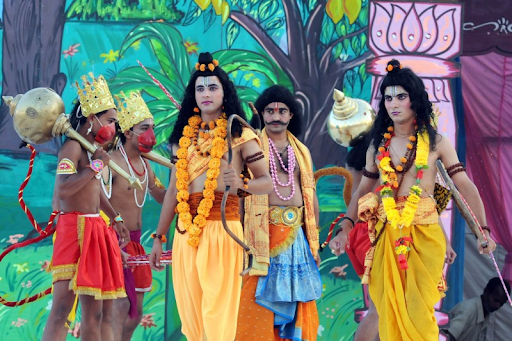 A group of devotees enact the scenes of Ramayana, the glorious life story of Lord Rama when He incarnated as the seventh incarnation of Lord Vishnu.

Rama Navami is the day when Lord Rama, the seventh incarnation of Lord Vishnu, incarnated in human form in the land of Ayodhya, North India. The word “Rama” literally means one who is divinely blissful and who gives joy to others, and one in whom the wise Sages rejoice.

Ram Navami falls on the ninth day of the waxing moon in the Vedic month of Chaitra (April/May). This day is also observed as the divine marriage ceremony day of Rama and His Consort Sita and thus also referred to as Kalyanotsavam.

The story of the Ramayana is a classic, eternal, universal message of Dharma versus adharma, of deva versus demon, of good versus evil, as represented in the battle between Rama and the demon King Ravana.

Lord Rama is an Avatar of Lord Vishnu who came down to earth to battle the invincible Ravana in human form. Lord Brahma had been receiving complaints from all the gods about the havoc that Ravana was wreaking on earth, but because Lord Brahma had granted Ravana so many boons, he could not be killed by a God. But Ravana had become so overconfident that he would never expect an attack from a human being. So Lord Vishnu agreed to go down to Planet earth in the form of Prince Rama, the son of King Dasharatha and Queen Kaushalya and destroy Ravana. The killing of Ravana is symbolically the killing of the deep ignorance and negativity inside every unenlightened human, so he may attain enlightenment or superconsciousness.