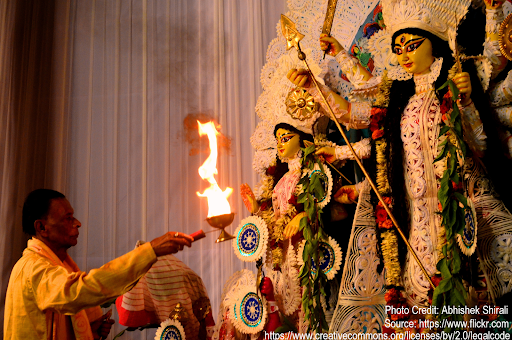 The day marks the victory of the seventh incarnation of Vishnu – Lord Rama when he killed the ten-headed demon Ravana and thereafter handed over the throne of kingdom Sri Lanka to Ravana’s brother Vibhishana. The word ‘Dussehra’ is derived from two Sanskrit words – ‘dasha’ and ‘hara’ – that mean defeating the ten (referring to the ten heads of the evil force of Ravana). The day also marks the end of Durga Puja, where people remember goddess Durga’s victory over the buffalo demon Mahishasur and a host of demons as narrated in the chant “Chandi”, to help restore Dharma.

Durga led a battle against Mahishasur and it lasted for nine days and nine nights killing several demons in the event. Durga killed Mahishasur on the tenth day. Therefore, different manifestations of the goddess Durga are worshipped during the nine-day-long Navratri festival each year. The tenth day is dedicated to Durga and is called Vijayadashmi. The feminine power is worshipped and celebrated during the festival of Navratri. Navratri celebration culminates with Dussehra on the tenth day, when the deity of goddess Durga is immersed in a river or a lake sending her away ceremoniously into the divine space where she came from for the ten days of worship.

People celebrate the festival in different ways across the country. In North India, various colorful fairs are organized. Plays based on the story of Ramayan, which is known as Ramleela are performed. On the day of Vijayadashami, huge effigies of Ravan, Meghnad (Ravana’s son), and Kumbhakarn (Ravana’s brother) are also set on fire.