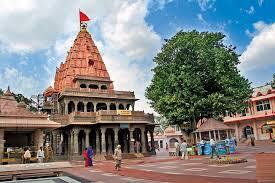 Mahakaleshwar Jyotirlinga is a Hindu temple dedicated to Paramasiva in the form of one of the twelve Jyotirlingas, which are said to be the most sacred forms of Lord Shiva. Jyotirlinga is that form of Shiva as an infinite column of light or effulgence which form he took  to resolve a dispute between Lord Brahma and Lord Vishnu.

This temple is located in the ancient city of Ujjain in the state of Madhya Pradesh, Central India. It is situated near the Rudra Sagar lake. The presiding deity, Lord Paramashiva is in the  form of a Shivalinga. It is a Swayambhu linga meaning it is a natural formation, deriving currents of Cosmic energy (Shakti) from within itself as against the other deities and lingams that are ritually established and invested with mantra-shakti (power of sacred utterances called mantras).

As recorded in the Arunachala Purana, Paramashiva, Lord Brahma and Lord Vishnu once had an argument over who was supreme. They approached Paramasiva to resolve their dispute. Paramashiva pierced the three worlds taking form as an infinite column of Light, which is represented as the Jyotirlinga (Jyoti – Light; Linga – Shivalinga). He then told Lord Vishnu and Lord Brahma to travel along his light-form and find anyone end of it. Brahma traveled upwards to find Paramasiva’s head and lied that he had found it using as false witness a screwpine flower (tazhamboo in Tamil), while Vishnu traveled downwards to find Paramasiva’s feet, conceded defeat. Paramashiva in order to teach Brahma a lesson for uttering a lie, and for not understanding that Paramasiva actually stood as an “infinite” column of Light,  that was the most Supreme partless Reality, declared that Brahma would not be worshipped in any form in any temple and the screwpine flower will not be used in his worship thereafter, while Vishnu would be worshipped for eternity. Brahma understood his folly and entered into a series of appropriate restoratory actions. The jyotirlinga shrines, thus are places where Paramashiva appeared as a fiery column of light. 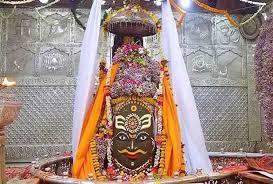 Context for Paramasiva appearing as a Jyotirlinga in Ujjain

According to the Puranas, the city of Ujjain was called Avantika and was famous for its beauty and its status as a devotional epicenter. It is said that upon hearing the pleas of His helpless devotees, Lord Shiva appeared in his Mahakala form and destroyed the enemies of King Chandrasena, who was a pious devotee of Lord Paramashiva and worshiped him all the time. Upon the request of his devotees Shrikhar and Vridhi, Lord Paramashiva agreed to reside in the city and become the chief deity of the Kingdom and take care of it against its enemies and to protect all His devotees. From that day on, Lord Paramashiva resided in His light form as Mahakala. Paramasiva also blessed his devotees and declared that people who worshipped Him in this form would be free from the fear of death and diseases. Also, they would be granted worldly treasures and be under the protection of the Lord himself.

The deity of Mahakaleshwar is revered as dakshinamurti, which means it is a South-facing deity (dakshin means South). This is a unique feature, upheld by the tantric shivnetra tradition to be found only in Mahakaleshwar among the 12 Jyotirlingas. The deity of Omkareshwar Mahadev is consecrated in the sanctum above the Mahakal shrine. The images of Ganesh, Goddess Parvati and Kartikeya are installed in the west, north, and east of the sanctum sanctorum respectively. To the south is the image of Nandi, the vehicle of Lord Shiva. The deity of Nagchandreshwar in the third storey is open for darshan (public view) only on the day of Nag Panchami. The temple has five levels, one of which is underground. The temple itself is located in a spacious courtyard surrounded by massive walls near a lake. The shikhar or the spire is adorned with sculptural finery. Brass lamps light the way to the underground sanctum. It is believed that prasada (sacred food offering) offered here to the deity can be re-offered unlike all other shrines.

On the day of Maha Shivaratri, a huge fair is held near the temple, and worship goes on through the night.

The Mahakaleshwar temple is also a Shakti Peeth

The shrine is also revered as one of the 18 Maha Shakti Peetham.

Shakti Peethas are shrines that are believed to have enshrined with the presence of Shakti due to the falling of body parts of the corpse of Sati Devi, when Lord Shiva carried it. Each of the 51 Shakti Peethas has shrines for Shakti and Kalabhairava. The Upper Lip of Sati Devi is said to have fallen here and the Shakti is called as Mahakali.