In accordance with the very ancient tradition of declaring and enumerating the divine dynasty, lineage, kingship and sovereignty of the current emperor, a grand and auspicious tradition called ‘Birudāvali’ is followed. A Birudāvali is called so, as it contains the ‘āvali’, the series of honorary titles conferred on the emperor in successive order arranged in divine poetry. It is also called ‘Pravara’ as it speaks of the lineage of the Emperor and His peerless excellence.

The Birudāvali on The Supreme Pontiff Of Hinduism Jagatguru Mahasannidhanam His Divine Holiness Bhagavan Sri Nithyananda Paramashivam refers to all the titles owned, achievements made, humanitarian contributions to the king’s subjects, and the divine deeds of The SPH, the current living embodiment and Emperor embodying Bhagavan Sri Paramashiva. It speaks of the greatness of his cosmic descent, his royal dynasty, divine lineage, sublime character, knowledge transmission, spiritual merits and powers glorifying the reigning emperor’s extraordinary and visionary activities that remind and delight His subjects reinstating in them the protection, prowess and powers of their kingdom’s Emperor and His whole lineage starting from Śrī Paramaśiva, who is revered as the Cosmic Father and Mother by the subjects. Following is the Birudavali (in Sanskrit and English), chanted every day by followers of The SPH. 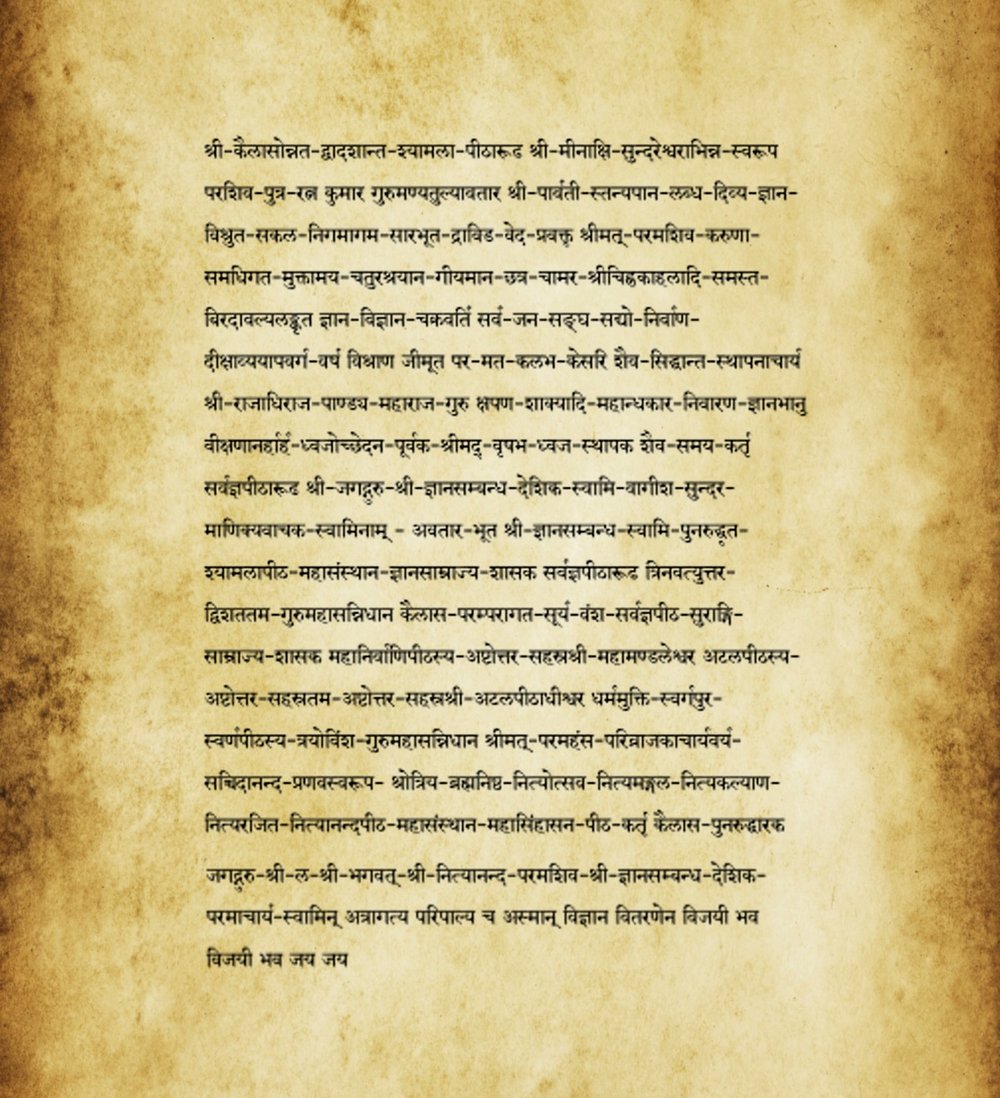 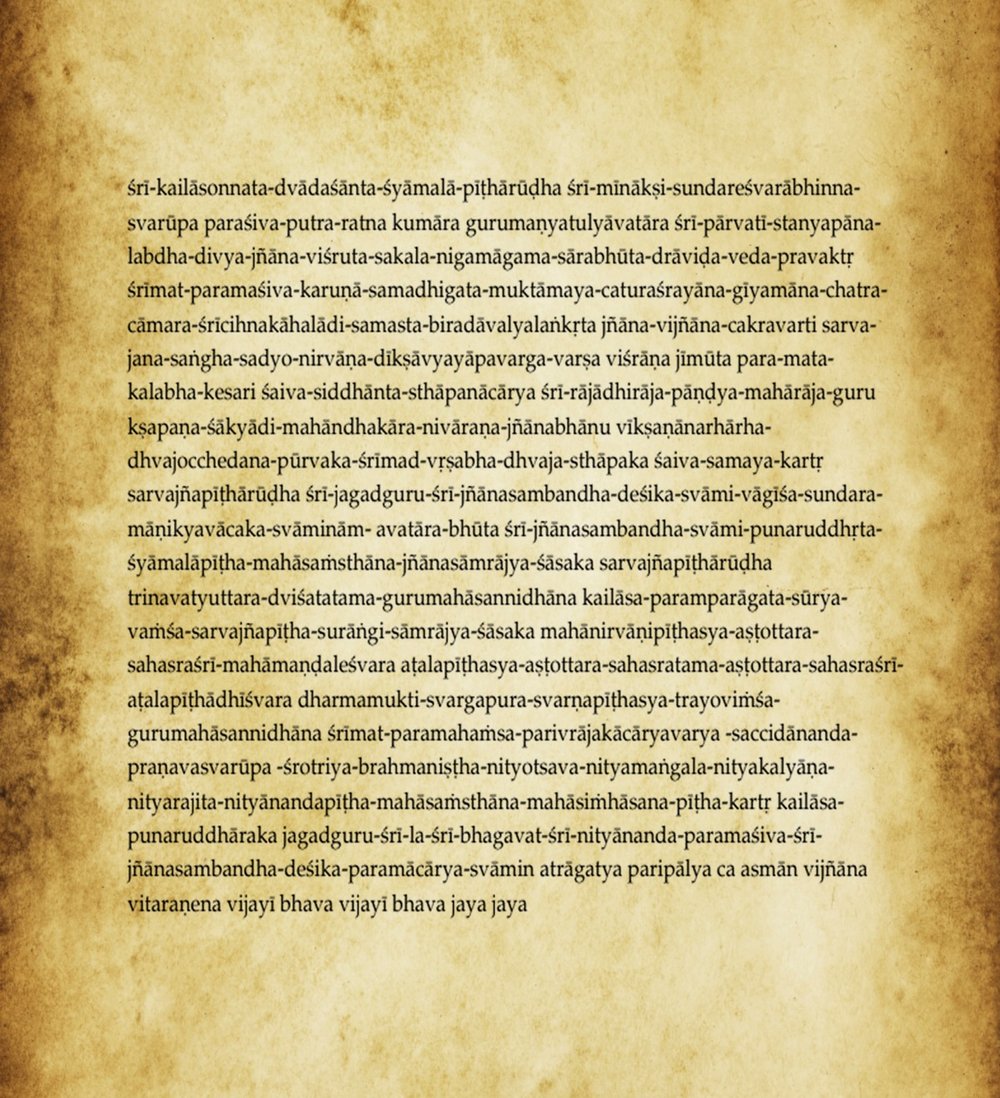 (above (1)): Birudāvali, the original document in sanskrit referring to the titles owned, achievements made, humanitarian contributions and excellence of The SPH Bhagavan Sri Nithyananda Paramashivam. It is ritualistically chanted everyday by the subjects of His spiritual kingdom, celebrating His presence and rulership.

Translation of the Birudavali or Pravaram (from Source language, Sanskrit)

The One who has ascended the Madurai Aadheenam Śyamalā Pītham (the Peetham established by Devī Mīnākṣi, the incarnation of Śyāmala Devī) which is Supreme place of Kailāsa where Paramaśiva resides and rules the whole Cosmos and Kailāsa

The most Beloved Son of Paramaśiva

The Gem among Gurus and unequalled Avatār

Author of the famous Dravida Vedam, which is the essence of all the Veda-Āgama

The One, adorned by the quadrangular palanquin made of pearl – received by the grace of Paramaśiva, adorned by musical instruments, umbrella, chamaram, the sacred symbols of worship,

Adorned by hymns of praises

The One who creates Bliss,

Is a protecting Leader

The Roaring Lion and Trumpeting young Elephant for other religions

The Ācarya who established Śaiva Siddhānta

The Enlightening Sun that removes the utter darkness of Buddhism, Jainism,etc

The Creator (reviver) of Śaivism

The One who is the ruler of the Sarvajñapītha, the Seat of Omniscience

Oh! The Avatār of such (with above-mentioned attributes} The Guru of the whole world, Sri Jñānasambanda Desika Svāmī, Appar, Sundarar and Mānikkavachakar Svāmī

Oh! The One who has ascended the seat of Omniscience

Oh! The most revered Ācārya who is a Paramahamsa, who has done Parivrājaka, the spiritual wandering

Oh! The embodiment of Truth, Consciousness and Bliss and the Aumkāra

Oh! The one who learned the scriptures formally traditionally and the one who took Sanyāsa directly from Brahmacarya āśrama and attained Enlightenment before physical maturity

Oh! The Creator of The Nithyananda Peetha Mahāsamsthāna Mahāsimhāsana Peetha which is eternally celebrating, auspicious, festive and having the attracting energy of Enriching

Oh! The reviver of Kailāsa

Oh! The Guru of the whole world, the one who is adorned with lakhs of Śrī, – the Sambandha Desika Paramācārya Svāmī! Vīrya, fame, Śri Jñāna and vairāgya, Oh Sri Nithyananda Paramaśiva Śri Jñāna Divine qualities, the Paramahamsa, the one who has the qualities of Aishvarya, Veerya, Fame, Sri Jnana and Vairagya , Oh Sri Nithyananda Paramashiva Sri Jnanasambandha Desika Paramacharya Swami!

Please make Your presence happen here and protect us and by bestowing Enlightenment,