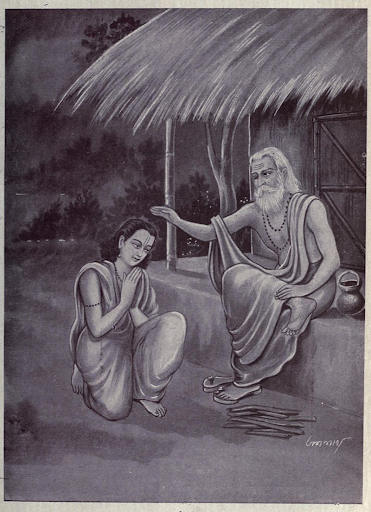 A painting of a Guru blessing his student.

Guru Purnima is the traditional Hindu tradition of paying gratitude and reverence to one’s spiritual master, or Guru. This festival is traditionally observed by Hindus, Buddhists, and Jains to revere their chosen spiritual teachers/leaders and express their gratitude. The festival is celebrated on the full moon day (Purnima) in the Hindu month of Ashadha (June–July) as it is known in the Hindu calendar.

The primary, fundamental, foundational first principle of Sanatana Hindu Dharma is the Guru-Disciple relationship. On this day, devotees express their gratitude to their guru by making a traditional offering of coconut and rice to the Guru, called “Guru Mudi”. Coconut signifies ego, and rice signifies Karma or a collection of unfulfilled experiences that stay in us and which constantly pull us to fulfill them. These are offered at the feet of the master, who takes away the ego and Karma of the disciple and gives him a new life.

This was the day when Krishna-Dwaipayana Vyasa – author of the Mahabharata – was born to sage Parashara and a fisherman’s daughter called Satyavati; thus this day is also celebrated as Vyasa Purnima. Veda Vyasa is also the compiler and organizer of the four Vedas (source text of Hinduism), by dividing them into four parts based on their use in the rites, and characteristics and teaching them to his four chief disciples – Paila, Vaisampayana, Jaimini, and Sumantu. It was this dividing and editing that earned him the honorific “Vyasa” (Vyas = to edit, to divide). “He divided the Holy Veda into four, namely Rig, Yajur, Sama, and Atharva. The histories and the Puranas are said to be the fifth Veda.”

Veda Vyasa – the Compiler of the four Vedas.