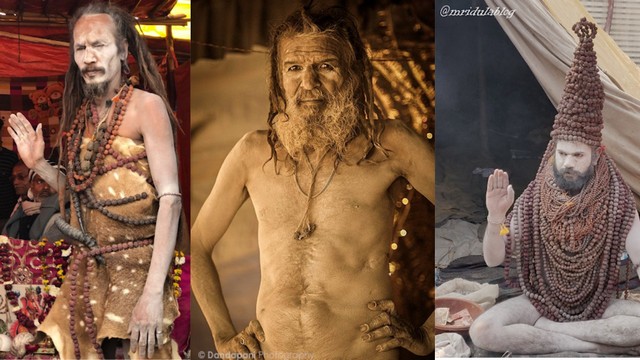 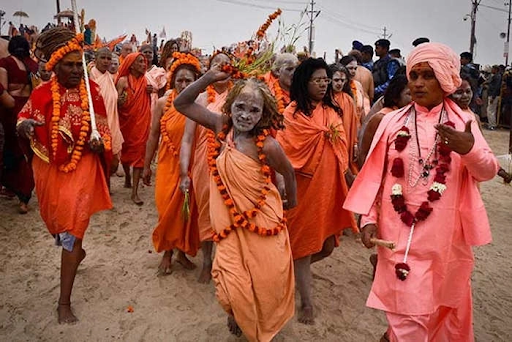 (top) Nāgā Sādhus at Kumbh mela celebrating; (bottom) female Nāgā Sādhvis on their way to the ritualistic bath (snan) at the Kumbh Mela.

Martialism has been associated with monastic traditions in man and monks of the Far East and particularly China, Japan and Korea are well known for martial arts they developed. In India too militant ascetics have a long history and became organized into the nāgā institution that influenced Indian asceticism in a big way. The word nāgā implies nakedness signifying renunciation. An essential rite in the initiation of every Shaiva sannyāsi consists of removing one’s clothing and walking seven steps completely naked, so one  breaks the social conditioning and bondage that caused one to cover one’s own body.

The British rulers of India generally curbed this custom but even they could not curb the ferociousness of the nāgã sadhus and allowed them to move in procession through the streets completely naked during the Kumbh Mela.

The life of Naga Sadhus is one of courage, freedom and extraordinary discipline. Nāgā sādhus have powerful yogic bodies that can tolerate extreme temperatures. Their only protection against cold is and their spiritual powers and the vibhuti (sacred ash) they apply freely all over the body.

Most Nāgā sādhus wear rudraksh māla (sacred energy beads) and an iron bracelet (kada), and carry a damaru (Paramashiva’s drum) and a kamanḍalu (water pot). Their only other adornments are weapons of defense, which are  part of the akhāḍā culture, which are worshipped every day.

Nāgā sādhus can be identified by their holy trishul (Śiva’s trident), staff, sword, conch and other musical instruments. They admit to their fold only those who are unmarried or who are widowers or in short, who have no family obligations. At the time of initiation into this order, an ordinary ascetic is called Vastradhari (clothes wearer). He serves all his senior ascetics. After the probation of three years, he is promoted to a higher grade. There is no definite time limit for a Vastradhari Naga ascetic to attain full-fledged Nagaship. A candidate may be promoted to the status of Nagaship within two years of his entry into the Order or he may take even twelve years to reach this status. The initiation ceremonies of Nagas take place invariably at the time of the Kumbh assemblage. Mandaleshwaras (chief monastic heads) of different Akharas at an auspicious time initiate the candidates who have completed their period of probation.

The affairs of Nagas are conducted by a body called Ashta Parishad (council of eight members). The president of this Parishad is elected every month. The election of the Ashta Parishad Committee is done once a year.

Protectors of the Nation

The Nāgā sādhus were also well known for another reason: their skill with wielding weapons. Of course the most basic weapon of a Sādhu can be considered to be his staff but Sage Patānjali, some time in the period between 200 BC to 500 A.D., was the first to mention real weapons, specifically an iron lance, in the hands of an ascetic. Banabhatta, a Master of Sanskrit Prose of the 7th century A.D., properly describes war-like Shaiva ascetics in his biography of the emperor Harshavardhana and how they utilised their martial abilities for spiritual as well as mercenary objectives. The first sect to be associated with arms and martial arts was the Shaiva Kāpālikas. There is evidence dating to prior to the 13th century that regiments of armed ascetics from these sects protected the kings in protecting the Nation and a temple high priest of Marwar (Northwest India) maintained a battalion that was bigger than any possessed by feudal lords of the area. The nāgās assumed the role of soldiers of the Hindu faith against several Mughal invasions of India where sādhus who were often butchered by armed Muslim fakirs.

They also fought against Ahmed Shah Abdali defending Govardhan, year 1759 CE. After losing thousands of Naga Sadhus, Abdali withdrew as the Sadhus had no assets to lose except their lives.

The prime general of the Afghans, Sardar Khan; launched an attack on Gokul (Uttar Pradesh in India). Here however, stirred by the atrocities of the invading Afghans, thousands of ash smeared warrior monks barred the way. The grim Naga sadhus armed with swords, matchlocks and cannons had called together their wandering bands to rise in defence of dharma.

In the mid-seventeenth century, the bands of sadhus and assorted holy men coalesced into larger groups often numbering more than 10,000 strong – they provided protection to the temples, the travel routes and even towns and rival armies. For many centuries the monks and disciples began to take up arms amidst the upheavals of northern India and during the fall of the Mughal Empire they emerged as a serious force to reckon with.

One of their notable leaders Rajendra Giri Gosain held such a reputation of bravery that his band of Nagas would contend with over ten times their numbers of enemies with utter abandon and fury. Later times saw some of the larger bands under Himmat Bahadur Anupgir Gosain lead vast armies across the northern Indian plains

The famed Afghan cavalry launched itself against the Nagas to be met with a wild and reckless counter charge by the Nagas. The utter disregard for their own lives displayed by the Hindu holy men sent the initial Afghan attackers retreating in confusion and defeat.

The lineage of Mahanirvani Akhada

END_OF_DOCUMENT_TOKEN_TO_BE_REPLACED

History of The Kumbh Mela

END_OF_DOCUMENT_TOKEN_TO_BE_REPLACED

The Reviver and Organizer