Kapila Jayanti festival celebrates the birth of Kapila Muni, who was the first head of Mahānirvaṇi Akhāḍā appointed by Paramasiva and who is an incarnation of Paramashiva and Mahavishnu. It is the foremost festival celebrated amongst the Sadhus and Sanyasis of the Mahanirvani Peetha. Considered to be the Adi Guru (foremost Guru) of all the Mahanirvani Sadhus, Kapila Muni’s day of birth is regarded with utmost reverence and respect. Across the Mahanirvani Kingdom, various Sadhus and Sanyasis celebrate this day by preparing a large feast for their fellow disciples, called a Bhandara. A puja (ritualistic worship) and Abhishekam (sacred bath) is performed to the deity of Kapila Muni, followed by Aarati (ceremonious offering of the sacred flame) to the deity.

It is grandly celebrated in the suburb of Daraganj, Allahabad. The prominent members of the akhadas under the Mahānirvaṇi Akhāḍā gather at this sacred place to celebrate the birth of Kapila Muni. 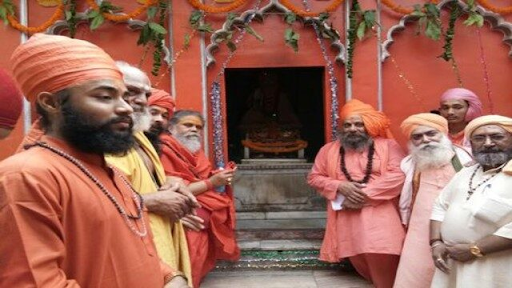 13 prominent members of the akhadas under the Mahānirvaṇi Akhāḍā celebrate the birth anniversary of Kapila Muni at Prayagraj, Allahabad. The Kapila Muni shrine is seen in the picture