History of The Kumbh Mela
About 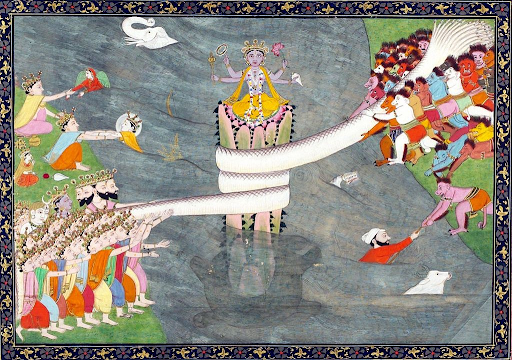 Following are extracts from the narration of the story of “the Churning of the Milky Ocean” by His Divine Holiness Bhagavan Nithyananda Paramashivam on 4 Aug 2007:

“It was Narada (Hindu Sage) who started everything. One day, he saw the jewel on the chest of Vishnu, a new jewel – the Shamantaka, a beautifully shining jewel on Vishnu’s chest. And he asked, “Bhagavan, from where did you get that? He said, “Some devotee gave. Varuna raja, King of the Ocean.” Narada thought, “Oh god! Such a pretty jewel.” He went and spoke to Indra (chief of Gods). He told Indra, “Indra, look! Varuna is your servant but he took the Shamantaka and gave it to Vishnu; he did not give it to you.” Indra got very annoyed but he can’t show that directly to Narada because he knows Narada will go and tell Vishnu. So he said, “No, no, no! He gave it to Bhagavan (a term used to refer devotionally to God) , it’s ok, leave it. It should be with Bhagavan.” But immediately he called Kubera (Lord of wealth) and said, “How dare Varuna will hand this over to Vishnu without asking us?” This was because, all the Nidhi (wealth) of the Planet Earth and the Ocean, belong to Kubera. Conch is the wealth of the Ocean. All the things and jewels of the ocean are denoted by the Shankha, conch. All wealth that comes from the land is denoted by the Padma – the lotus. So, both belong to Kubera.

Now Kubera calls Varuna and straight away asks, “How come this did not come to my treasury?” Varuna says, “You are Yaksha, He is Lakshmi.” Yaksha means the one who possesses wealth but neither enjoys it nor lets others enjoy it. Lakshmi means the one who keeps the currency moving; who enjoys and lets others enjoy. So Yaksha gives importance only to hold wealth; Lakshmi means “rotating currency”. Varuna says, “Even if I give it to you, it will only be sitting inside a treasury. No one will ever know, nobody will see it. Don’t you see how pretty it looks on the chest of Vishnu? That is why I offered it at the feet of Vishnu. He is wearing, He is enjoying.”

Kubera makes a petition to Indra saying, “This cannot be accepted. Now we don’t know what all wealth Varuna is hiding, so let us churn (the ocean) and bring everything out. Let us bring the whole thing to the treasury now itself. Nothing should be left with the Varuna Raja.” This is where the problem started. Now, both Indra and Kubera decide to churn Varuna Raja, the ocean and get all the wealth out and put it in Kubera’s treasury; they decided that it should not be left with Varuna anymore. They decided that they will not inform or invite the Trimurtis (Trinity of Paramasiva, Brahma, Vishnu) because the whole plan is against Vishnu!

Varuna falls at the feet of Vishnu saying, “Bhagavan, I don’t know what happened and what they are trying to do. They decided to form a friendship with the Asuras (demons).” Then, Vishnu smiles and says, “Forget it, they will come to me because they have bought trouble. Where else will they run? I will take care.”

Then, the Asuras and Devatas, demons and divine beings decide that the Meru mountain should be the spindle for churning. Meru is the sacred five-peaked mountain of Hindu, Jain and Buddhist Cosmology and is considered to be the center of all the physical, metaphysical and spiritual universes. Vasuki, the snake on which Vishnu is resting, was used as the rope.

The rope is Vishnu’s, the Spindle is Paramashiva’s! Now, they discuss what to do, and how to get both these items from Vishnu and Paramashiva. They need to get the two items without telling them because they may ask for their share of whatever comes out. They finally decide to send Narada as their representation. Narada goes and says to Vishnu, “Bhagavan, we need your Vasuki and the hill of Paramashiva for churning the ocean.” Vishnu says “What is there, please take it.” Similarly, Paramashiva also gives the Meru mountain to Narada Muni.

As always, Narada begins to stir some trouble. He goes and slowly tells the Devatas, “See, the Devatas are leaders, so hold Vasuki’s head, not the tail. So, now  the fight starts, to see who will hold the tail of Vasuki and who will hold the head. All the Devatas say, “We are superior, we will hold the head.” The Asuras say, “Are we lower than you? We will hold the head!” So, the fight starts. They have already placed the Meru mountain in the ocean, which is sinking every minute that they delay churning. There is an intense fight, and the demons surround the chief of the Devatas, Lord Indra. Now, Narada runs again to Vishnu Loka (Vishnu’s abode). “Oh Lord, see what has happened. Please, you have to do something!”  All the devatas run and fall at the feet of Vishnu and say please forgive us, it is Indra’s mistake. Please do something immediately. Then Vishnu says, “Alright, I will do something. Go, I will come.”  He waits till Indra’s karma is exhausted, he doesn’t go immediately.

Finally, Vishnu decides to go and says, “As the Devatas are elders, they will only hold the head.” However, the demons try to argue with Vishnu also. They say, “No, we will only hold the head.” Finally, Vishnu says, “Alright, we will come to a compromise. You guys will hold the head. Then, if Amrita (nectar) comes first, Devatas will drink first. Whoever wants to hold the head, they should give priority to the other person for sharing the Amrita.”  The Asuras agree to this. Losing wealth for the sake of ego is demonic; it makes one an Asura. Gaining  wealth along with ego is being like the Devatas (divine beings). Gaining wealth and enlightenment is like the Rishis (enlightened Sages)!

The Asuras did not even have the idea that they are losing Amrita, Nectar! Vishnu goes and tells the Devatas, “Fools, Vasuki will emit poison if she is used as a rope because she will be pulled this side and that side. He will sweat and his sweat is poison, will you be able to handle it?” The Devatas immediately rush to Vasuki’s tail.

They start churning and the sound which is created deafens the whole world. Treasures within the ocean start to come out. The seahorse, Apsaras (celestial beings of great beauty), Patala loka (subterranean realms of the universe), Kamadhenu (a divine bovine-goddess), Kalpavriksha (celestial wish-fulfilling tree) – all of these began to emerge from the sea. There were so many things coming out of the ocean that many of the Devatas and Asuras ran helter-skelter in trying to grab as much as they could. Finally, Goddess Lakshmi (the consort of Lord Vishnu) came and Vishnu took her.

Suddenly, Vasuki, became very tired. However, both the Devatas and Asuras were both so greedy, that they do not allow Vasuki to take a break.  They continued to pull Vasuki, and she became longer. When she became a little longer, the spindle starts to sink. The Meru mountain then started to weigh down Vasuki, and she began to emit poison. The moment poison was spit out by Vasuki, they all left everything and ran away.

He takes the poison and swallows it. Devi holds Paramashiva’s neck and the poison stays there. This earns Paramashiva the name Neelakantha, or the Blue-Throated one. Even if poison is added to an enlightened being, not only he does not die, the quality of poison disappears. It becomes divine!

Vishnu balances the tortoise, and finally comes out  the Amrita, or Nectar. From below, the Amrita Kalasa (pot of nectar) comes out and the moment it comes out, all their agreement and morality is lost. According to the agreement, Devatas should have the first share, but the Asuras started running to catch the Kalasa (pot) and finish the Amrita themselves.

The Devatas were afraid of what will happen if it goes to the Asuras. The Asuras would not give even the water used to wash that pot to the Devatas. In the gap, Dhanvantari, who is the Lord of Medicine, keeps the Amrita Kalasa secretly hidden in four places on Planet Earth – that is Haridwar, Allahabad, Nasik, and Ujjain (where the Kumbha Mela festival happens!). Twelve years for human beings is one Kshana (time gap between two thoughts) for them. So, in one Kshana, he changed three places.

Finally, Vishnu takes a Mohini incarnation (the form of a beautiful young woman). He takes the form of a seductive woman, and says, “Both of you stop fighting, I will share the Amrita, and give you both.” The moment they see the Mohini, they forget about the Amrita! They arranged themselves in neat rows and Mohini starts serving the nectar to the Devatas first. Nobody had the guts to ask Mohini or question her. However, two demons, Rahu and Ketu, even though they are seduced by Mohini, they are cunning and intelligent. They go and sit on the side of the Devatas. However, not only does she not serve them, but knocks them with the serving spoon, making them lose their heads. That is why they belong neither to the Asuras, nor to the Devatas. They become shadows.

By the time the devatas finish, the Amrita Kalasa becomes empty and Mohini also disappears. Since the Devatas drank the Amrita, the Asuras were not able to kill them. The fight starts again and the Asuras are not able to sustain it. They themselves run and hid under the ocean. The Devatas thus rejoice over their victory.”

Haridwar, Allahabad, Nasik, and Ujjain –  These four sacred places, thus, have acquired mystical powers and purity, holding cosmic energies of immortality. Amrita, the nectar is the nectar of immortality. It is because 12 days of Gods are equivalent to 12 years for humans; the Kumbh Mela is celebrated once every 12 years in each of the four sacred places – banks of river Godavari in Nasik, river Kshipra in Ujjain, river Ganges in Haridwar, and at the Sangam of Ganges, Yamuna, and Saraswati in Prayag, where the drops of nectar fell. Millions of devout, come together to partake in ritualistic bathing and ceremonies to cleanse themselves of all sins at this time. 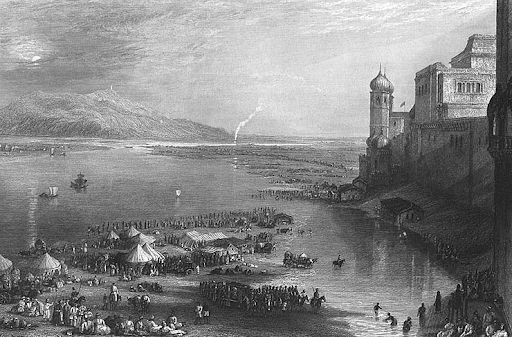 The lineage of Mahanirvani Akhada

END_OF_DOCUMENT_TOKEN_TO_BE_REPLACED

The Reviver and Organizer